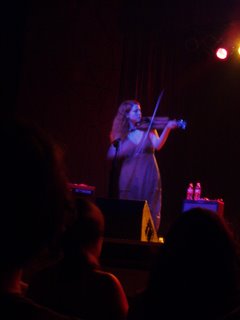 I actually have been knitting lately and have also acquired more yarn for my stash. However, I have been busy with work or busy avoiding work and have been feeling too guilty (about not being productive enough at work) to post. But it is towards the end of the work day, there is nobody around to make me feel bad for not working and I have used up all the steam I had today for the poster I am making.

Since my last post I have seen Jolie Holland and it was a great concert. I snapped a few pics, but not many of them turned out very well. Here is the best one. I have also received a shipment of yarn from knit picks and knit up half of my sizzle top (I haven't taken any photos of it). My stash was also enhanced by a beautiful yarn present from skatergirl and stitchkommander (and chris) - it is artful yarns sock yarn, in nice blue colors. I will have to pick out a cool sock pattern for myself.

Other than that I have been house sitting up in the mountains, which reminds me - I saw a bear! It gallumphed right across the road in front of me when I was driving down from the mountains on Saturday. It was so cool, but it scurried into the woods before I was able to snap a picture. 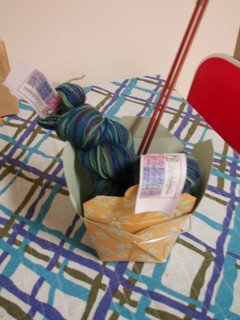 steps towards a new project 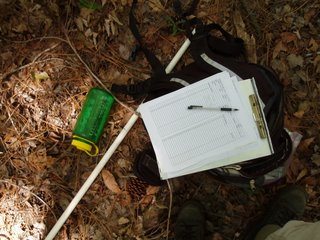 Last week I purchased sizzle (which I am excited to get started on). The yarn Wendy called for was way out of my price range so I conceded to get my yarn from knitpicks (I ordered shine worsted in grass- hopefully it will work). Some of you may remember that I was curious about why their yarn is oh soo cheap and hoped that it wasn't because of animal cruelty or for want of better working conditions. Well, while checking my order status today I came across this and it seems that there isn't much more evil than globalization going into this yarn (that is what they are saying anyway), and I am quite sure globalization is unavoidable when it comes to yarn anyway. Just thought I would share.

This week stichkommander and skatergirl are in town. Hopefully we will get some berry picking in. Tomorrow night stitchkommander and I will be attending the Jolie Holland concert at the Orange Peel in Ashville NC. I am really excited, she always puts on great shows.

(Oh and I finally did the afterthought heel on my first beaded rib sock. It was way easier than I ever thought it could be.)
Posted by ily at 3:07 PM No comments:

While working on the coast this week I saw an armadillo playing in the mud. It was sooo cute. I just uploaded my first video to youtube.com. Here it is! 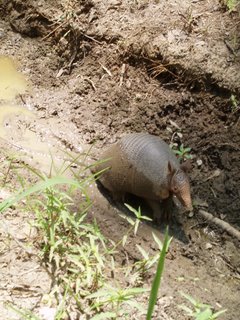 And I uploaded a second one which is also fabulous! Check it out.
Posted by ily at 10:41 AM 1 comment: 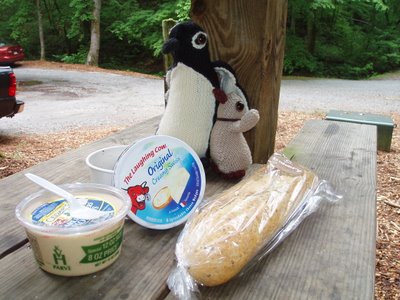 Oh and I finished the Penguin mother and child.
Posted by ily at 1:24 PM No comments: 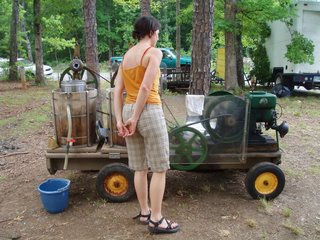 After returning from vacation for over a week, the 4th of July arrived, as did my friend Katie. She stayed until this morning and successfully extended my vacation for about a week - thanks katie. Since she is a woman of the north and had never been to the south I did my best to show her the colorful palette of the south. On the fourth we went to Hill Billy Day in Mountain Rest where we had boiled peanuts, homemade ice cream and enjoyed some local bluegrass. Thankfully we missed the greased pig contest and greased pole contest (where they pin $100 to the top). I also showed her some local sites and we tasted some not so local ale. We teamed up to play cornhole last night and were better than we thought we would be - came in second place for the neighborhood cornhole tournie. Over the last week we discovered our sneaker talent to team up whilst drinking at pool, cornhole, and dominoes. Ah pabst where would we be without you.

While spending time in my yarn laden apartment Katie caught the bug - the knitting bug. She learned some new stitches while making a swatch washcloth and also made the kitty wonton for her kitty Royal. Blue told her that the bug will fade once she is out of my presence, I'm not sure exactly what is meant by that.... hmm.

Over the last week I received my waylaid knitting bag (pictured below). I 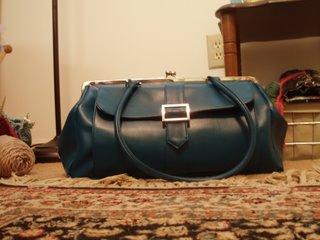 t is one of those marvelous bags created by Jordana Paige. Now it is happily full of yarn, notions, and needles. I hope to have a chance to use it soon.
Posted by ily at 11:55 AM 2 comments:

Back in the south 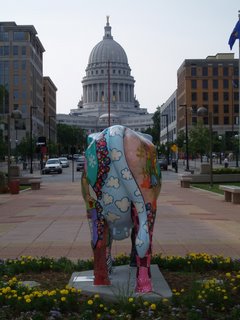 I have only just returned from my trip back home. I had the most wonderful time hanging out with family and old friends (well they aren't that old, but the friendships seem to be aging - in a good way). For the first time in my life I played tourist in Madison and actually took photos and walked through the capital building. There were also cows all over town. I still haven't figured out exactly why they are there, but they enhanced the aesthetics anymoo.

In Madison I was able to quickly stop by my most favorite yarn store in all the world Lakeside Fibers, it always has what I am looking for, with the addition of coffee and a view of the lake - can't beat it. While I was there I finally picked up some Gems opal, a pattern to make some felted daffodils, size 2 turbos, and of course - more cascade 220 (for the daffodils). I didn't get much of a chance to knit and only worked on small easy things like felted coasters and washclothes.

This week I have a friend in town so I don't know how much knitting I will get done. I plan to show her the upstate's finest. Tomorrow there is supposed to be a Hill Billy Festival in Mountain Rest with a greased pig and all. Should be a wonderful cultural experience and hopefully delicious boiled peanuts will be on hand.
Posted by ily at 1:37 PM 1 comment: