until i go back that is. Today is my first day on leave and so far it's pretty great. I woke up early due to a small munchkin in my belly pushing on my bladder. After some toast and coffee I saw blue off to work, took a small nap and did some cleaning up of the house. Yup pretty exciting.
The midwife came over for a checkup too, all is well in the belly. I didn't end up getting a 3D scan last week as bubs was too big to get a good shot and of course facing inward which is good, just not for getting a nice shot of the little face.

A month or so ago it seemed like I had been pregnant FOREVER, but now that feeling of doom (and excitement) is setting in. Sh*t I'm gonna have a baby soon! Then we'll have a whole new set of issues to deal with. Bring it on I say. But give me at least a week to get some more nesting and readying of the house done. Like many first time moms I will probably go 2 weeks past my due date and be griping to get this thing out of me. I would like to deliver around the due date or a week before would be good I think.

Here is a pic of the bebe in my belly from 14 weeks ago! Yikes. The star is a bit bigger now, the outline not so thick. 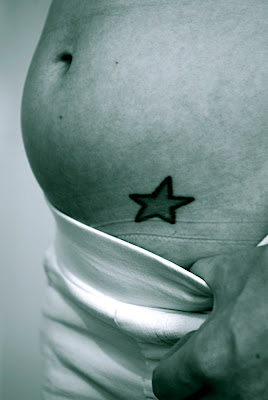 I think this afternoon I will take a walk and do some knitting, not necessarily in that order.
Posted by ily at 7:54 PM 3 comments:

4 this week and 3 the next. Can you tell I'm ready to be done with work? It's not the work that I mind really, my bosses have been pretty easy on me, it's just that having to be there all day... no laying down, no napping. I think a lot of women here in NZed finish work by 34 weeks or before. However back in the states it is more like right up until you give birth - crazy 'maricans. I'm about 35 weeks, so 5 weeks until the due date.

We had a little surprise at the midwife appointment on Friday. After a night of not sleeping that well and waking up feeling sore, we found out that baby has 'dropped' and it was definitely during the night because the day before I was having plenty of rib kicks! Seems a bit early, but I guess that just happens in some pregnancies. We're pretty sure the head is down, but to be certain and to check on the size I get an ultrasound next week, a 3D one at that. It will be cool to see bubs again, especially in 3D.

Blue has come and gone to the states. I missed him loads while he was gone and I had to take care of myself. He's treats me pretty good when he's here. A few times last week I got to nap after work while he started the fire and cooked dinner, just like a little elf! :D

He brought me back lots of baby things, much of which got laundered this weekend. And some yarn! I had ordered some lorna's laces shepherd worsted (which is washable and dyed beautifully) to make the baby chalice blanket (below). I'm really enjoying the yarn and the pattern is a cute and quick knit. I haven't made anything in worsted weight on size 10 needles in a very long time! It's a nice little treat! 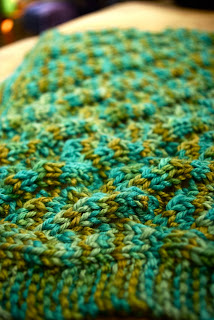 I've even had my wheel out lately too! I dug out some superwash merino I dyed last spring. I split it in half lengthwise and spun two bobbins, starting from opposite ends and then plyed them together. I dyed it to be a nice striping yarn, which I still think it will be, but I love watching colours blend together as I ply and that's why I decided to spin and ply it as I did! It's very bright (especially for me) but I think I'll be able to dream up a good project for it... maybe for a little girl? 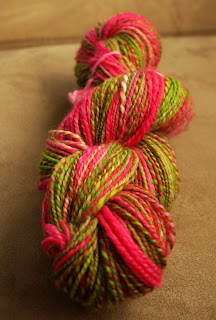