Although the helicopter ride was short, it was sweet. When we got dropped off, it was cloudy and cool so the views weren't too great. But still, I was in a helicopter flying over the rainforest in New Zealand, so it wasn't bad.

After the drop off we worked for 2 days at the treeline and then had a day to hang out before the helicopter's scheduled pick up. Luckily the weather on the day off was great. We ended up taking a short trail from the hut up to a ridge where there was a nice lake surrounded by boggy forest. It was very much like being home on Lake Hildebrand. The species were a little different and it was a bit smaller. All it needed was a few rafts and a pier ;) 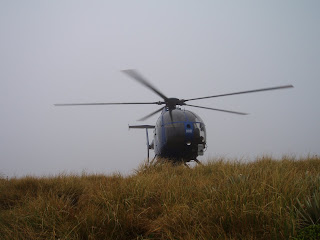 I made this hat from knitty last night. Unfortunately it didn't turn out as cute as expected. It's a bit big on me and if I pull it down in order to actually keep my ears warm it looks like a big puffball. If I made it again I would probably use smaller needles or make size small. Luckily for me, it's summer so I don't have to worry about pulling it off or not.

I'm off to work in "the bush" for the week. We get to helicopter in. HURRAY! Hopefully I'll get some great pics to put up. 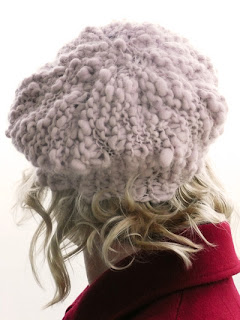 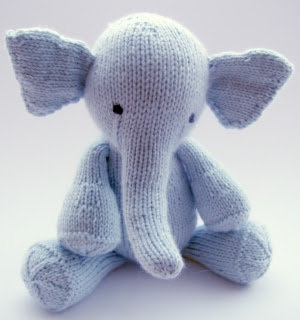 And I want to make this now! My friend L says, "haven't you already knit an elephant?" The answer is yes, yes I have, but it isn't here in New Zealand with us so... I obviously need to make another one, plus this one is different, way different.

I went back to blond earlier this week. 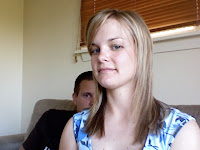 No more mousy brown for this gal. Funny thing is, it doesn't really seem any different to me. Nobody else seemed to notice either, but my hair has been blonding up more than usual this summer (thanks to that hole in the ozone that hangs over this part of the earth).
Posted by ily at 2:14 PM 2 comments: 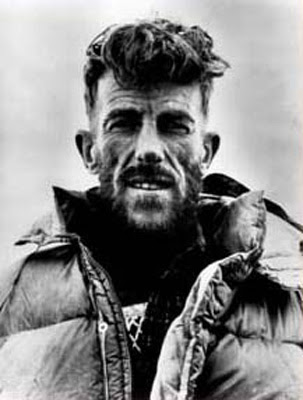 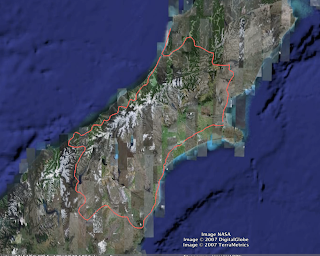 Over the xmas break blue and I got in our little red car and headed out on an unplanned adventure. We had some ideas of places we wanted to visit, a couple of guide books, and a tent. This image from google earth, with my crude drawing of our route is a pretty good representation of our journey.

We headed north first, over lewis pass to the west coast. We did an overnight hike up a mountain in some old mining territory and had some beautiful views. Then up the coast to see the pancake rocks. And at night we went and saw glow worms in a cave! 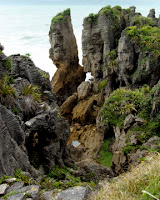 The next day we meandered down the coast to the glaciers which were beautiful.

There were a lot of mountains to see (when it wasn't cloudy and raining) and waterfalls too. One observation we made in our travels and nights at various campgrounds is that most of the campgrounds on the west coasts were predominately inhabited by german tourists. As we passed back over to the east side of the southern alps range, the german tourists dropped out and the french tourists appeared. Not sure why...

Anyway after a truly amazing evening in a campground filled with kiwi-hicks holidaying, we set out early (our earliest start on the whole trip) to the east coast in search of penguins, and we found them! 2 different species! PENGUINS!!! up close, tuxedos and all. It was the highlight of the trip for sure. The species pictured below is the yellow-eyed penguin, it is the rarest penguin species. We saw several pairs nesting on the rocky shores and even saw a chick getting fed about 1 m away! (although mostly obscured in a bush) Man, penguins are sweet! We also saw 180 little blue penguins (the worlds smallest penguin species) coming ashore to nest at night. We had to pay for the experience, but it was worth it. They are about 30 cm tall and they are soo cute! The wouldn't let us take pictures though :( Blue has some up close and personal pics of the yellow eyed up on his flickr. 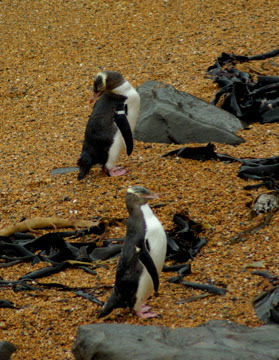